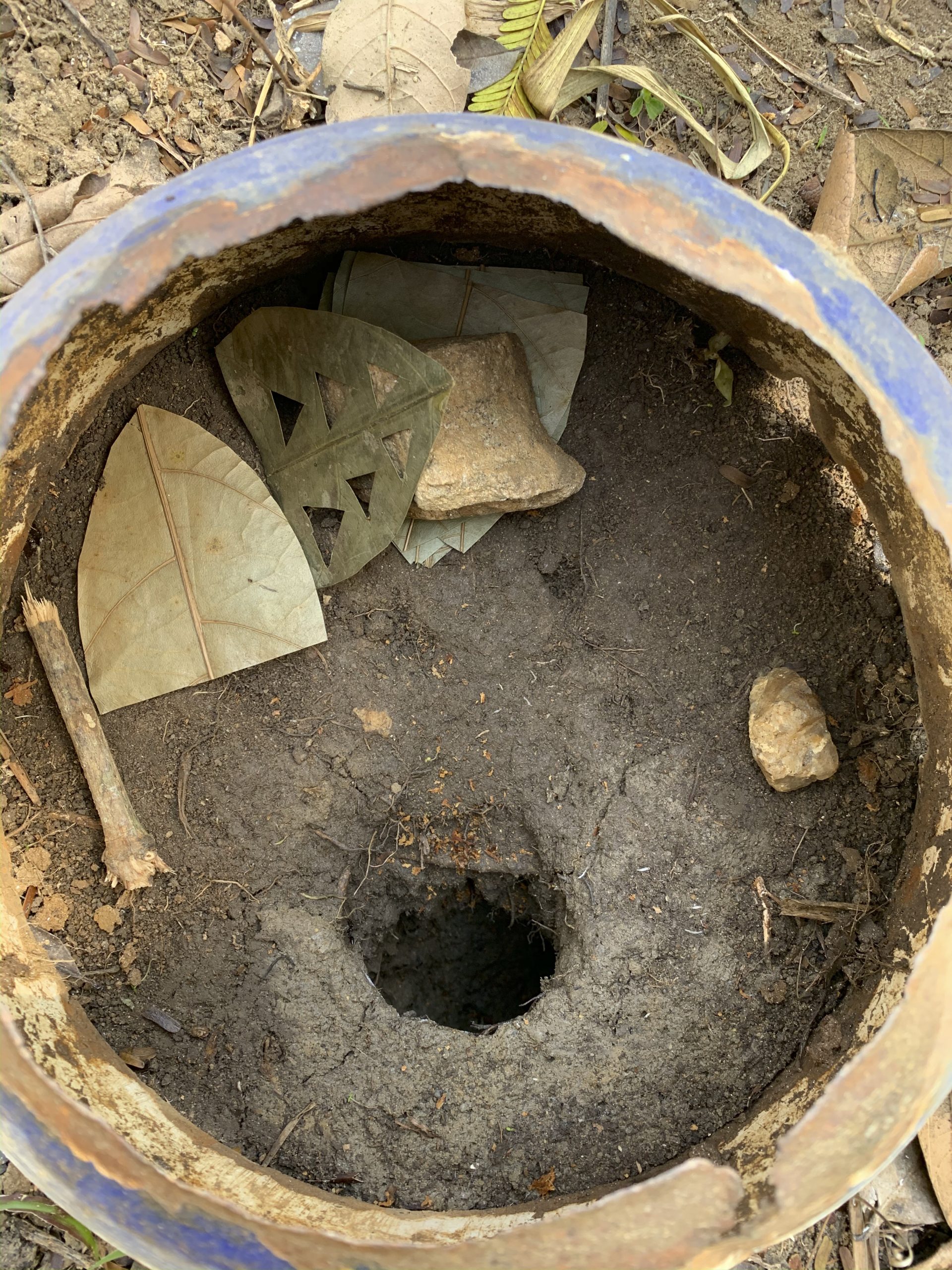 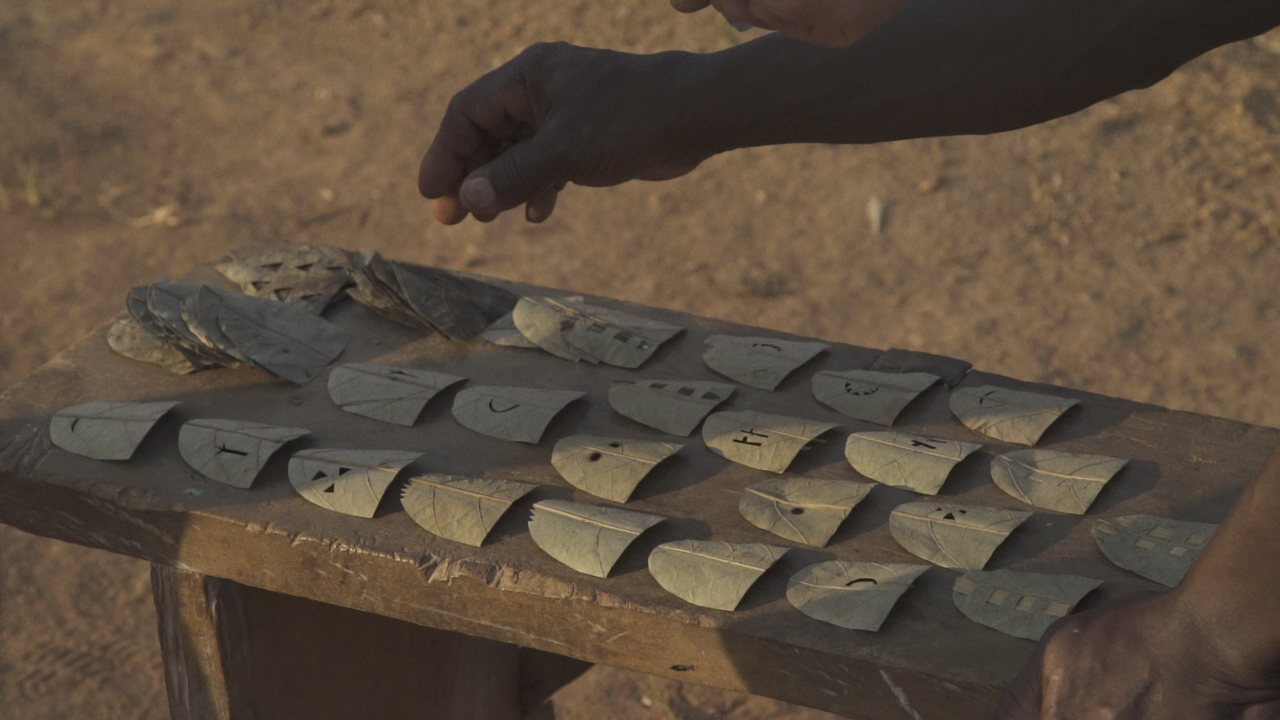 Amongst the Mambila people in Cameroon and Nigeria, the method of arachnomancy practiced historically through today is known as ŋgam dù (nggàm dù). ‘ŋgam’ refers both to the practice of divinatory logic (a generic term for all forms of divination) and the ground-dwelling spider (Heteroscroda crassipes) whose wisdom it consults.

During ŋgam dù, a set of binary questions are put forward to the spider oracle, whose response is interpreted via the spider’s specific rearrangements of the arachnomancer’s divination cards. These cards are produced using stiff plant leaves from which symbolic shapes have been excised, and which have been arranged around the entrance to the spider’s burrow. This practice has been described by a number of scholars, including details published in the 1964 book by Paul Gebauer, Spider Divination in the Cameroons.

More recently, ŋgam has been elaborated in a series of texts by Oxford anthropologist and Arachnophilia friend Professor David Zeitlyn, a professor of Anthropology at Oxford University who has been collaborating with the Mambila people in Cameroon since 1985. Zeitlyn has been involved with a long-term exchange within the village of Somié, partly through his extensive research and publishing on the practice of ŋgam—most recently Mambila Divination: Framing Questions, Constructing Answers, published by Routledge Press in 2020. Zeitlyn has described the set up of an ŋgam dù divination as such:

“An inhabited spider-hole is located and the area immediately around it cleared of vegetation. Alternatively the spider can be dug out of its hole and taken to a more conveniently-sited abandoned hole. Over the hole is placed an old pot (c. 40 cm diameter), the up-turned base of which is knocked out. This is covered with a shard or piece of tin to act as a lid which can be removed to inspect the entrance to the burrow and its immediate surroundings. To begin divination a stone is rubbed around the top of the pot as the diviner blows into it saying yuo yuo (come out, come out). The procedure for asking a question involves placing a stick and a stone inside the pot, on either side and slightly in front of the hole, usually the stick to the left, the stone to the right. Opposite the hole, about 10 cm away, the divination leaf-cards are neatly stacked, pointing at the hole.”

Spider divination is used to address specific issues. It is not used to answer general philosophical or existential questions which are best directed at other forms of consultation or counselling. Although we often talk about putting a question to the spider, in actual fact this works differently: when a topic is broached, it is discussed with the diviner who reframes it so as to adhere to the nominally binary form of questioning. These are then put to a set of spiders in parallel and in succession. Such a feature of the process is one that diviners point to as justification for the reliability of their results.

If I am considering a journey, one way of asking is: “if I should go to London on Saturday then choose the stick, divine further choose the stone”. If the stick is chosen they will ask the same question again but with the polarities reversed to check the spider isn’t simply throwing the cards in the same direction. The ‘divine further’ option allows for a multiplicity of different alternatives to be asked but only if prompted by the rejection of other possibilities.

The divination leaf-cards used are obtained from a shrub1 whose leaves are doubled over, pressed flat, and then stored over a fire. A template is used to cut the outline shape which is common to all the cards, similar to those illustrated by the missionary Paul Gebauer who worked with the neighbouring Yamba people (then known as Kaka). Ideograms are then incised with a razorblade. Figure 1 shows a photograph of cards being made.

The cards are all of the same form2, and are similar to those found further South3. Each ideogram occupies two cards, appearing on one card only on the left of the central rib (negative) and on the other on both sides of the rib (positive). The ideograms are called ŋgə̀ə, which also means ‘symbol.’ For instance, a card with one palm tree symbol refers to a problem associated with palms (such as the danger of falling while harvesting palm-nuts from a tall tree), while the card with two palm tree symbols means that something positive is to be expected from palm trees. Diagrammatic versions of these cards are shown in Figure 2.

However, it should be noted that the meanings of the cards are rarely referred to in the course of Mambila divinatory practice; so, although several sets of cards were collected and others documented in the field, they are not discussed in detail here. Of the eight sets fully documented, none had more than 38 different ideograms, so they are less varied than sets discussed and comprehensively illustrated elsewhere.4 Table 1.1 lists the names and meanings of a typical set of divination cards. In addition to these cards, each set has a blank card at top and bottom.

Cards are kept in holders kup ŋgam made from raffia pith. These are also similar to those illustrated in Paul Gebauer’s book. Often several sets of cards are kept in one holder and used in the simultaneous consultation of different spiders. One diviner placed in his holder some feathers from a chicken cooked to provide sér ŋgam (see above) but otherwise the cards are treated as utilitarian objects.

In this opportunity, people can undertake a consultation through Nggàm dù. An initial issue will be raised by the participant, formulated in conversation with Professor David Zeitlyn, one of the project’s main collaborators whose research on Mambila divination and relations to the village of Somié has spanned several decades. Zeitlyn will then relay the participant’s question to the diviner, who will pose this to the spider/s in a divination that takes place over several days or weeks.

The question or statement as posed by the participant will be passed through several languages. Initially, from the client’s mother tongue, into English if necessary, and then into French or Jù Bà, the local dialect of the Mambila language as spoken by the people of Somié. The spider diviner will then, crucially, translate this from human to non-human comprehension in the vibrational language understood and spoken by the spiders. This extensive chain of interspecies communication will travel backward to the participant as the spider reveals its answer. If the spider is unable to respond and requires further clarification, the chain is invoked again as additional questions are asked.

After the consultation is complete, the participant will be invited for a conversation with David Zeitlyn, who will help to conclude the process within a reflection on the ‘answers’ given that contextualises them within the historic practice of ŋgam dù. Any documentation made throughout the divinatory process will be published onto Nggàm dù.

Given the lengthy process of mediation between participant, diviner and spider—across several time zones, languages and connections—the opportunity to pose a question is limited in number. In line with the project’s ambitions of preserving the practice of ŋgam dù and supporting the people of Somié, interested participants will be invited to consult with the spider/s upon donation of a set fee. All of the money raised through each consultation will then be distributed to a programme of local projects and the remuneration for each diviners’ work. For more information on the process of participation and donation fee, please reach out via email. 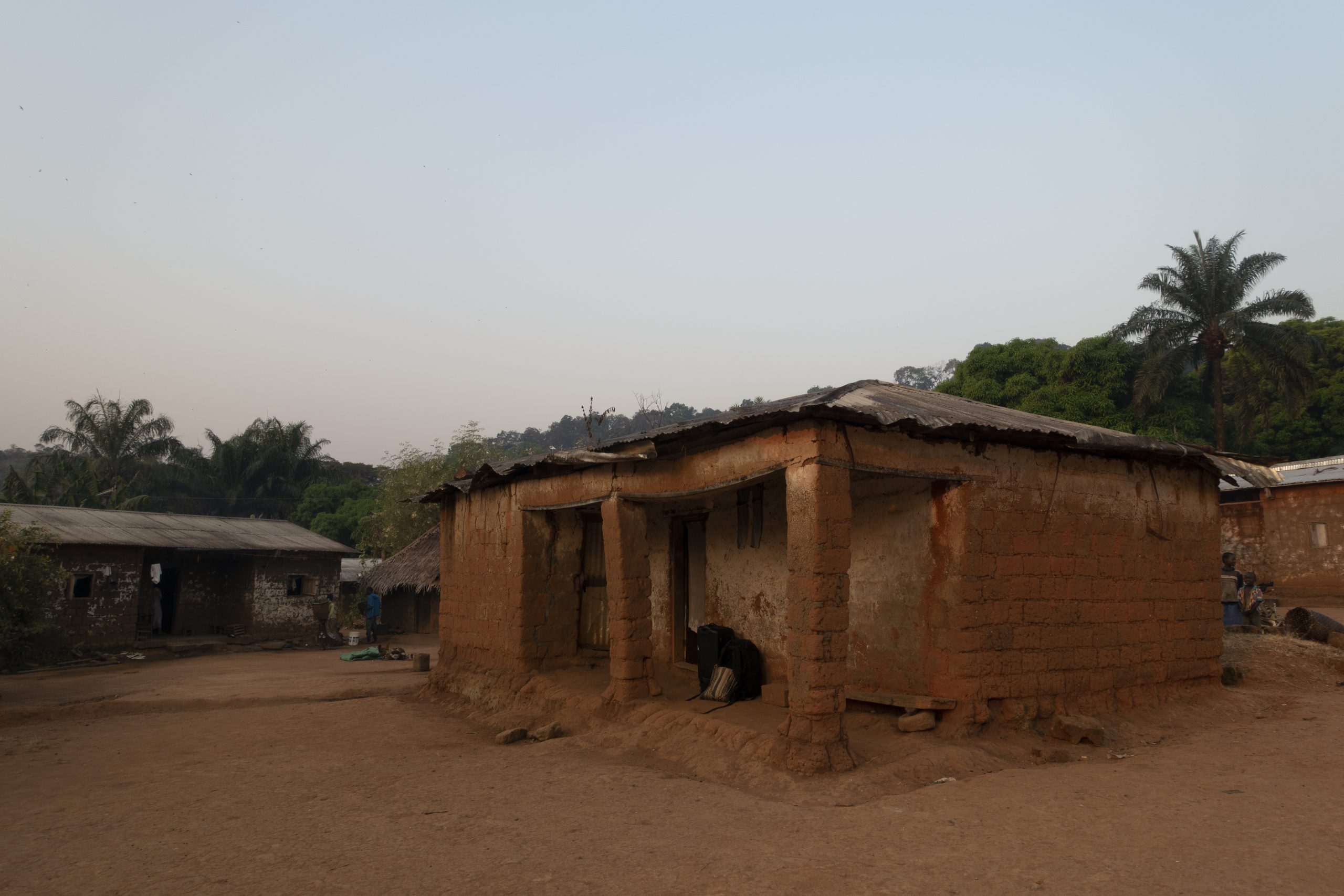 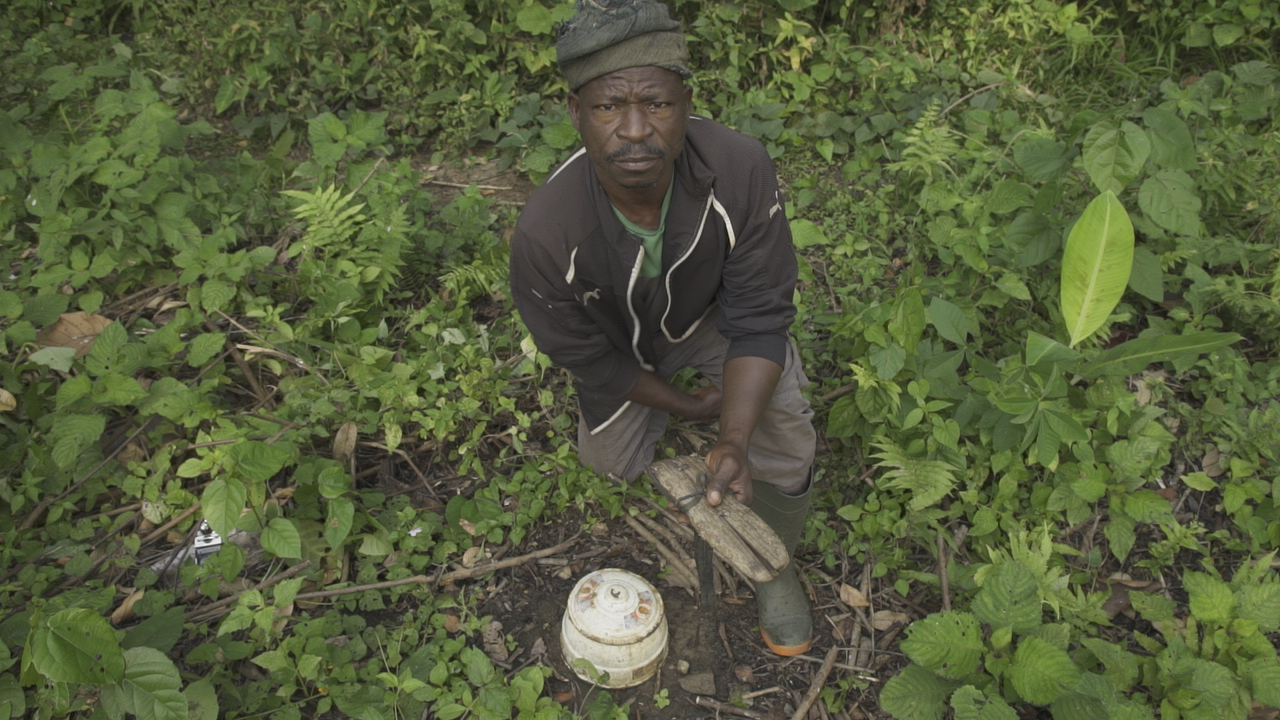 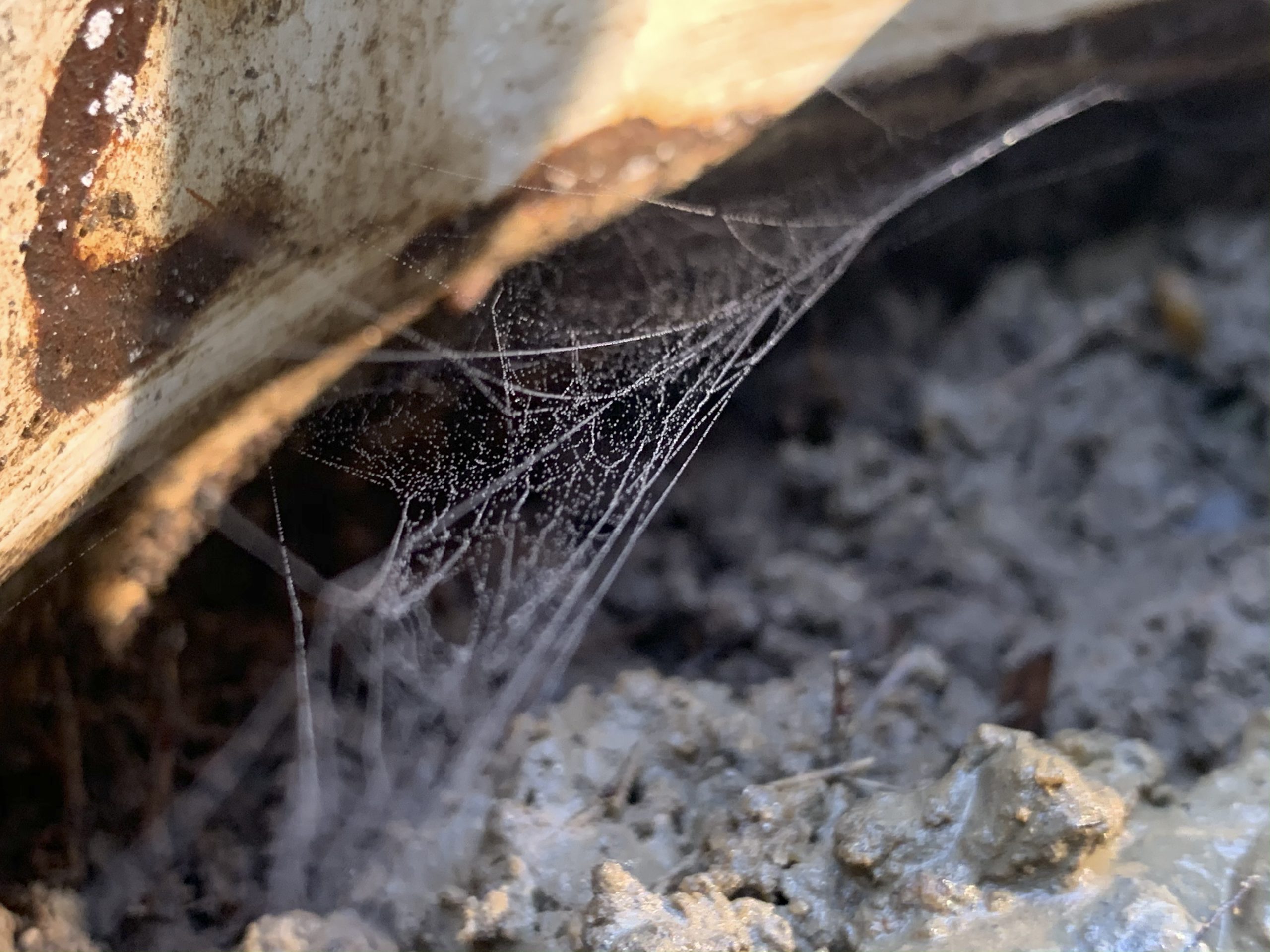